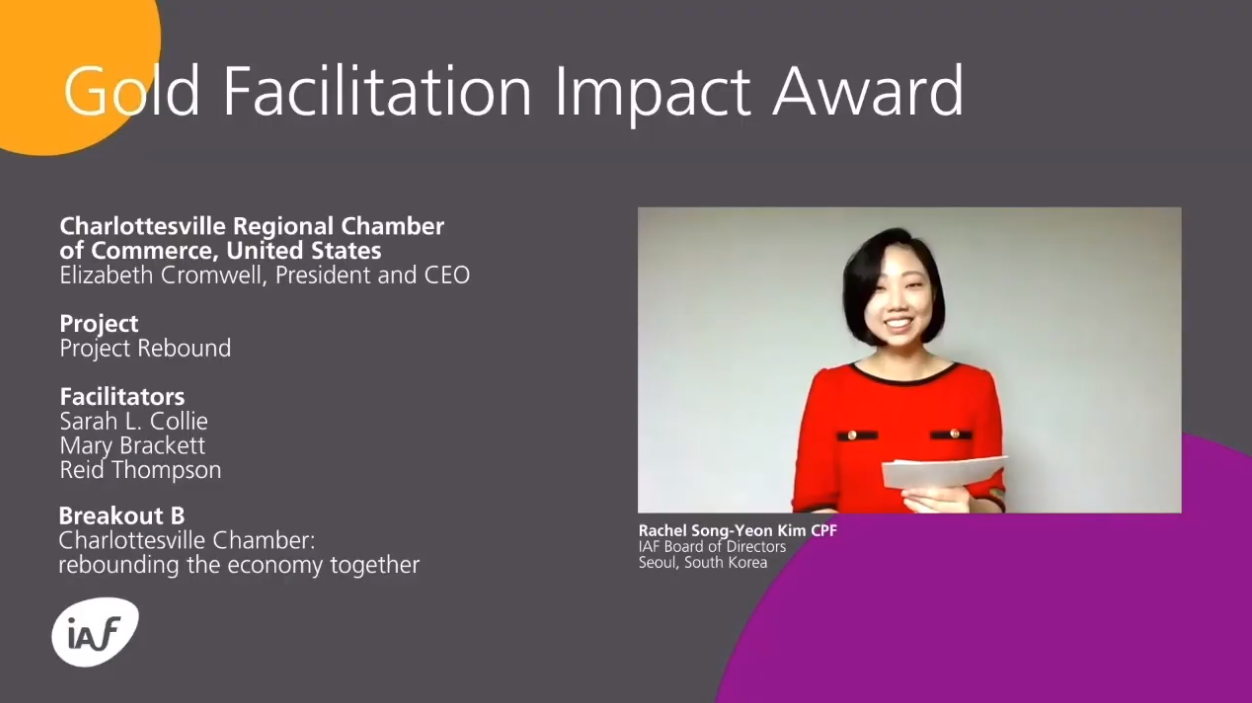 Project Rebound received a Gold Award from the International Association of Facilitators (IAF) at the 2020 Facilitation Impact Awards on October 27, 2020. Chamber President & CEO Elizabeth Cromwell accepted the award on behalf of Project Rebound and our volunteer team of professional facilitators from UVA Organizational Excellence. Thanks again to Sarah Collie, Mary Brackett and Reid Thompson for their contributions!

IAF also recognized Project Rebound with their Engagement Award for the enthusiastic social media response to our Rebounding Together video.

For more information about the Facilitation Impact Award, please see our August media release below. 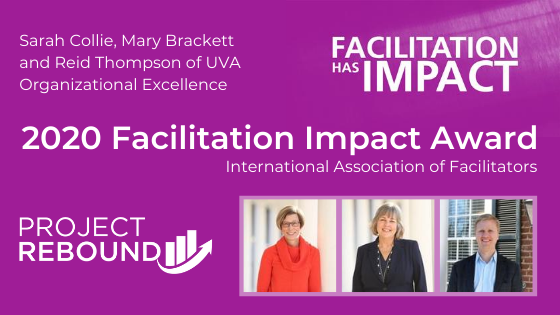 (August 22, 2020) The Charlottesville Regional Chamber of Commerce has received word from Melbourne, Australia, that the International Association of Facilitators (IAF) will recognize the Chamber for using facilitation to have a positive impact through Project Rebound.

“We have been fortunate to receive exceptional support from Sarah Collie, Mary Brackett, and Reid Thompson from the Organizational Excellence program at UVA,” said Chamber President & CEO Elizabeth Cromwell. “Their execution of Project Rebound meetings has set the bar for effective meeting management for us in the region to emulate going forward.”

Project Rebound is an ongoing local economic recovery effort led by the Chamber and economic development partners from the City of Charlottesville, Albemarle County, and the University of Virginia.

Project Rebound was one of 17 projects selected from around the globe – and one of three in the United States – to receive the 2020 Facilitation Impact Award. IAF will honor the awardees with a virtual ceremony on Monday, October 26. At that time, IAF will reveal who has received silver, gold, or platinum recognition based on the scores designated by volunteer reviewers from 20 countries.

Cromwell, Collie, Brackett and Thompson will jointly accept the award, which honors individual facilitators along with the organization leading each selected project.

During the month of May 2020, Project Rebound convened more than 35 virtual meetings, gathering input from nearly 300 local stakeholders to collaboratively launch plans for economic recovery and resilience in the wake of the COVID-19 pandemic.

Collie, Brackett and Thompson volunteered to facilitate the meetings, contributing more than 20 hours of direct facilitation and roughly 75 hours of preparatory and follow-up work.

Participants said they received inspiration and valuable knowledge from attending these highly effective meetings. The facilitators successfully adapted in-person techniques to a virtual meeting environment that was still unfamiliar to many at the time.

The data gathered from the initial Project Rebound meetings became the basis for “A Blueprint for Economic Resiliency and Reinvention in the Greater Charlottesville Region.” The Blueprint report, authored by KPMG LLP and supported by a GO Virginia grant, was released on June 25, 2020.

The report highlights rebuilding consumer, business and workforce confidence as an important theme of local conversations. Project Rebound participants identified health & safety concerns, an uncertain business environment, and confusion over guidelines as some of the confidence barriers to economic recovery.

The Blueprint report also features industry-specific recommendations as well as an “Opportunity Index” aligning dozens of participant suggestions with identified needs and outcomes.

“Sarah Collie brought such a high degree of professionalism and support to this project, it can only be described by the purest use of the word ‘awesome.’ Her hard and thoughtful work made our communications effective in large groups. A truly herculean effort was given by her and her team. She has my respect for a lifetime.”
– Rebecca Haydock, Director, Central Virginia SBDC (Team co-lead for Reviving Small Businesses)

“Mary and her team were exactly what we needed. They rose to the occasion and made this heavy lift not only manageable, but inspiring and regenerative. This has been one of the best managed and most rewarding teams I’ve ever been part of.”
– Justin Reid, Director, Community Initiatives, Virginia Humanities (Team co-lead for Protecting the Arts and Creative Economy)

“Working with Reid was wonderful!  He took our initial concerns about how to logistically run such a large public meeting online and cogently laid out and executed a well-defined plan. You’d never know this was his first time running a series of meetings to collect valuable input from multiple stakeholders of this magnitude!  He was a consummate professional and the Chamber and our community will benefit greatly from his leadership and facilitation capabilities!”
– Adrian Felts, Senior Manager at Signature Science, LLC (Team co-lead for Assessing Key Industry Clusters: Subgroup for IT, Financial and Defense)

About the Facilitation Impact Awards and IAF

The Facilitation Impact Awards (FIA) honours organisations that have used facilitation to achieve a measurable and positive impact as well as the facilitator(s) who worked with them.

More information about the awards can be found at www.iaf-world.org/site/facilitation-impact-awards.