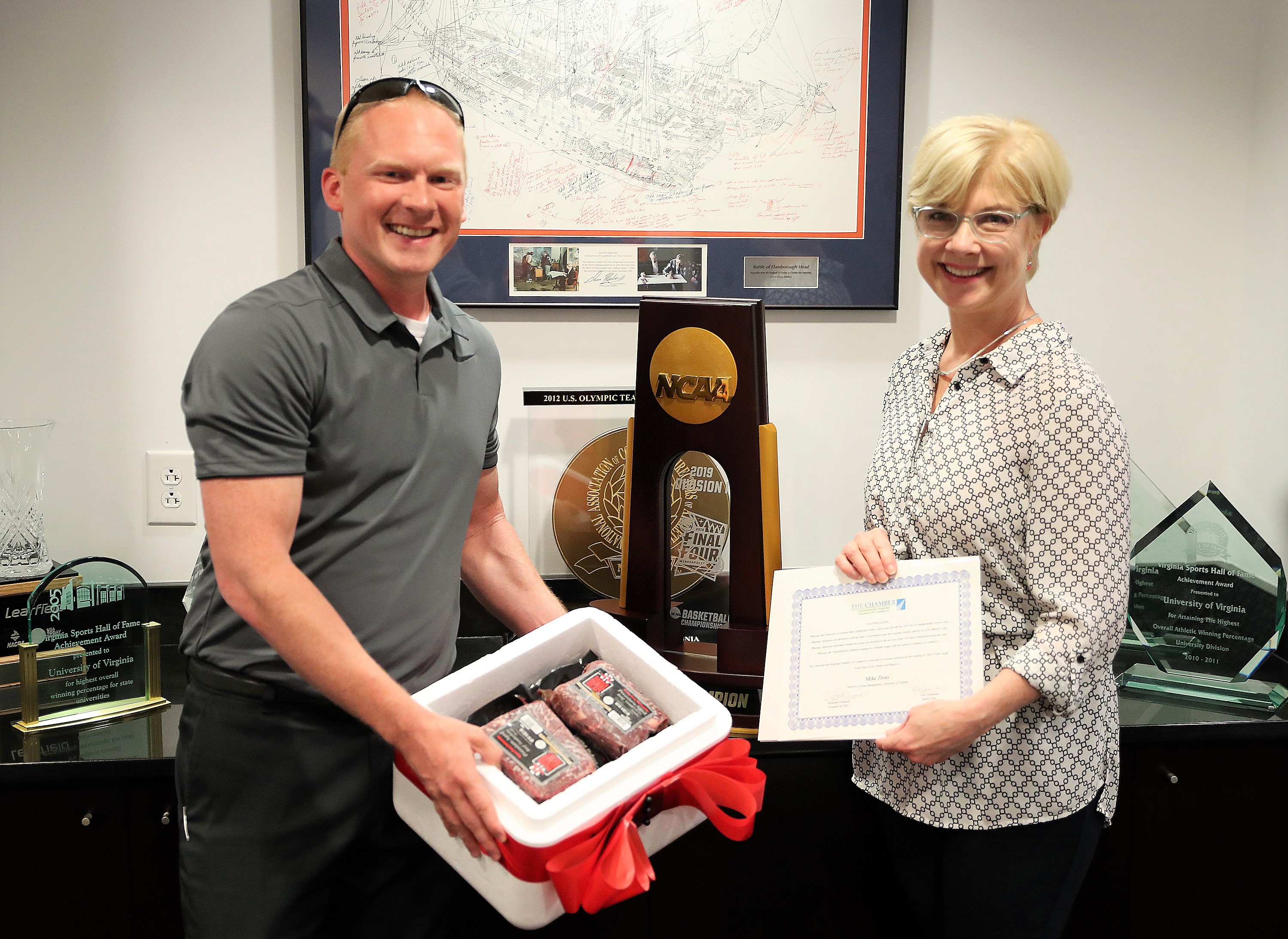 A key player behind the scenes at the UVA men’s basketball program received a gift of Raider Red Meats from Texas Tech, courtesy of the Charlottesville Regional Chamber of Commerce.

“All of the Chambers representing businesses in the Final Four communities bet each other, and since we came out on top, we received a great selection of Texas' finest USDA Prime beef from our friends at the Lubbock, Texas, Chamber of Commerce,” Cromwell said. “Both the Lubbock Chamber and the Auburn Chamber, who also sent a prize package, couldn’t have been more gracious about the outcome of the tournament.”

“The Chamber frequently works behind the scenes to help others reach their fullest success and potential,” she said. “We want to share the winnings from our Chamber vs. Chamber bet with someone who performs a similar role for the men’s basketball program – one of the unsung heroes behind their amazing Final Four victory.”

Cromwell and Charlottesville Chamber Board Chair Pete Caramanis presented the steaks to Mike Doto, Director of Event Management for Men’s Basketball, on Wednesday afternoon at UVA.

The UVA Athletic Department suggested Doto as the recipient of the Texas steaks. Doto is responsible for all of the program’s day-to-day event details, as game manager Mike coordinates all logistics on men’s basketball game days (event staffing, fan shuttles, parking operations, security staffing, crowd control, etc.), he is the primary contact with television for each game, served as point of contact for ESPN College Game Day operations, and is the liaison with the ACC Office to ensure we are meeting ACC Game Management protocols.

“Thank you to the Charlottesville Chamber of Commerce for recognizing one of our employees in such a special way," said Deputy Athletic Director Jim Booz. "Mike Doto’s service to the Athletic Department and especially the men’s basketball program has been tremendous. His leadership in helping to coordinate the viewing of the National Championship game at John Paul Jones Arena as well as the celebration at Scott Stadium were significant accomplishments for the University and the community. We are thankful he’s a part of our team.”